Images from my most recent sojourn in Bosnia & Herzegovina. More to come… 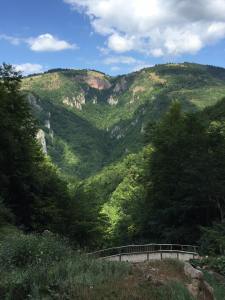 view from the Skakavac mountain waterfall, outside Sarajevo

Tom Simpson teaches religion, ethics, philosophy, and human rights at Phillips Exeter Academy in Exeter, NH. He is the author of *American Universities and the Birth of Modern Mormonism, 1867-1940* (University of North Carolina Press, 2016) and nonfiction essays about Bosnia for the Canadian literary magazine *Numero Cinq*. Born in 1975 in Olean, NY, he earned the Ph.D. in religious studies from the University of Virginia, where he specialized in American religious history. He writes, teaches, and lectures about religion in America, popular culture, Mormonism, and Bosnia. He lives in Exeter with his partner, Alexis Simpson, and their two children.
View all posts by Tom Simpson →
This entry was posted in Bosnia, Photography, Travel and tagged Bosnia travel, Cafe de Alma, Mostar, Sarajevo, Skakavac. Bookmark the permalink.