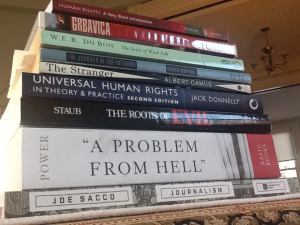 To keep “Wayne Street Soul” alive during the academic year, I’m launching a new series of posts on my teaching. I’ve had such an exciting set of conversations with students this spring in seminars on human rights, the Holocaust, and religious diversity in the United States, that I wanted to start compiling and sharing distilled versions of the curriculum.

My hope is that these resources will be of interest to a wide audience; they all relate directly to fundamental questions about diversity and coexistence in the 21st century.

So for starters, here’s a little about day 1 in the course on religious diversity in the U.S. I learned a long time ago how important it is to hit the ground running on day 1 and not lose the whole period to coma-inducing administration. So after brief personal introductions and an introduction to the course, I have students watch Valarie Kaur’s “Oak Creek: In Memoriam,” a nine-minute film about a 2012 shooting in Wisconsin that targeted Sikhs. In an arresting, memorable way, the film brings the central themes of the course — religious diversity, freedom, conflict, and coexistence — to the fore, and it prepares students for a sustained analysis of the long American experiment with religious freedom. I have the students share their responses with the rest of the class (what did you notice? what questions do you have?), and by the end of the period we’ve established and focus and momentum that will extend to the conversations to come.

Tom Simpson teaches religion, ethics, philosophy, and human rights at Phillips Exeter Academy in Exeter, NH. He is the author of *American Universities and the Birth of Modern Mormonism, 1867-1940* (University of North Carolina Press, 2016) and nonfiction essays about Bosnia for the Canadian literary magazine *Numero Cinq*. Born in 1975 in Olean, NY, he earned the Ph.D. in religious studies from the University of Virginia, where he specialized in American religious history. He writes, teaches, and lectures about religion in America, popular culture, Mormonism, and Bosnia. He lives in Exeter with his partner, Alexis Simpson, and their two children.
View all posts by Tom Simpson →
This entry was posted in Ethics, Film, Human Rights, Peacebuilding, Race, Social Justice, Teaching and tagged coexistence, Oak Creek, religious diversity, religious freedom, teaching human rights, teaching religion in America, teaching the Holocaust, Valarie Kaur. Bookmark the permalink.

2 Responses to New Series: Resources for Teaching About Religion, Violence, and Human Rights